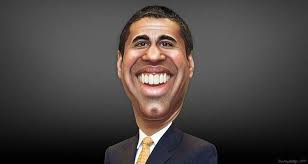 The US Federal Communications Commission (FCC) completed its first 5G auction, with a sale of 28GHz spectrum licences raising $702 million.
FCC chairman Ajit Pai said the auction is a "significant step toward maintaining American leadership in 5G" adding that the commission "will continue to aggressively push more spectrum into the commercial marketplace."
A 24GHz auction is expected to begin soon, followed by auctions for three more spectrum bands later in the year.
"By making more spectrum available, promoting the deployment of wireless infrastructure, and modernising our regulations – the three components of the FCC's 5G FAST plan – we'll ensure that American consumers reap the substantial benefits that will come from the next generation of wireless connectivity," Pai said.
A total of 3,072 licences offered in 425MHz blocks were up for grabs in the 28GHz auction. Of these only 107 recieved no acceptable bids.
The identities of the winning bidders will remain private until the close of the 24GHz auction.
Source